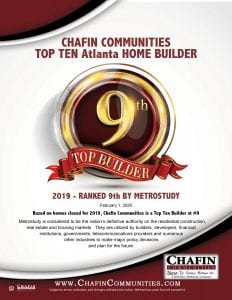 Chafin Communities RANKED #9 in 2019 By MetroStudy

Based on homes closed for 2019, Chafin Communities is a Top Ten Builder at #9 in Atlanta!

MetroStudy is considered to be the nation’s definitive authority on the residential construction real estate and housing market. They are utilized by builders, developers, financial institutions, governments, telecommunications providers and numerous other industries.

“It’s no mere list. The rankings, scorecards, tallies, and totals mean what they do because people work as teams to excel, produce value, deal with impediments, make a difference.

Together, Builder 100/Next 100 companies’ aggregated productivity generated more than $75 billion in local income among municipalities and submarkets around the nation.

Together, Builder 100/Next 100 companies’ aggregated productivity generated $21 billion in local, county, state, and federal taxes, fees, and other regulatory expenses in the process of delivering those 261,372 homes to owners.

Most importantly, Builder 100/Next 100 companies’ aggregated productivity caused two very important changes among customer buyers as they came to market. That total means that in each and every case, barriers to that buyer saying “yes” were lowered, while, equally, in each and every case, the customer’s own sense of him, her, or themselves elevated to a level where they saw themselves realistically as buyers.” – Metrostudy.com

These are always ranked by number of homes closed in previous year.

“The top 10 homebuilders includes several large companies such as Chafin Communities claiming a top 10 spot at 406 homes (2017 List). A variety of smaller homebuilders made the 2017 list, as well.” – Atlanta Real Estate Forum